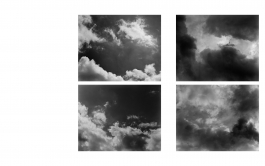 — This text first appeared in the catalogue accompanying Hannah Collins exhibition at the Sprengel Museum in Hannover in 2015.

The streets of Hackney in 1984 looked very different in their appearance to today. They were more deserted and darker. My studio at 10 Martello Street became my home when I moved on from my early marriage and had no-where else to go.  I confronted my own company and intentions head-on. The re-invention was harsh. My studio was uncomfortable and cold, and only the caretaker remained in the building at night as you were not allowed to live there. There were no other residents.

In a hulking old brick building on the corner lot opposite the studios was the All Nations, a flourishing West Indian club, that was only open from midnight on a Saturday. Guests poured out between six and seven am on Sunday mornings. Each week, the unlit street below filled with smart cars and couples in formal elegant clothes. I dreaded Saturday nights as the noise interrupted my sleep, already broken with anxiety. The rest of the time the neighbourhood seemed as empty as a desert. During this period I frequently wrote short sentences about events in this environment. This relieved my anxiety and became a part of my working process.

Broadway market, the nearest street with any shops, then reminded me of a harsh, remote Eskimo town. The bare metal shelves of the local supermarket opposite London Fields contained just a few cans. I eventually encouraged myself to go out and explore where I lived –  a rough mixture of East London poverty and 70s alternative lifestyle. Through windows and occasional broken panes of several squats you could see the posters pinned to the walls. Printed Indian  bedspreads hung as curtains in faded pinks and blues. Small workshops re-cycled all kinds of things. Grubby mechanics mended cars in deep dark spaces. I began to collect material that I found lying around the back streets.  Cardboard boxes and plastic wrapping piled up on my studio floor.  I gradually developed the idea of transforming them into flattened surfaces by photographing them together.

The first photograph included a television borrowed from the caretaker and my own mattress. I invited two friends who didn’t know one another to take part. I lit the scene with care. My aim was to create a momentary place on a real life scale. The temporary combinations seemed to liberate each from its origins.

The pictures included less and less, until I arrived at only cardboard packaging. I saw piles of cardboard carefully left to be collected by homeless people as darkness fell. The piles in my studio resembled the piles on the street – the valued materials amassed by the local dispossessed. The cardboard arrangements appeared endless as if they continued beyond the edge of the image.

For me photography served several purposes: as preparation and thinking, as documentation and eventually as a means to record the staged environments. The cardboard was a protective shell. I drew a picture of a shell for my first and only tattoo and an image of my tattooed back became the invitation card for an early exhibition.

My quest to resolve my relationship with my father continued, he had been diagnosed with severe paranoid schizophrenia. As he deteriorated he became itinerant. At one point he was a patient of R. D. Laing, I lived in a world mediated by Laing’s treatments which endowed my fathers paranoia and visions with legitimacy. I had to adapt to a new reversed order of thinking. I learned to adapt to these other realities, both individual and social.

My father carried his food around in a bag which also contained bundles of his letters, some of which were written to people he never actually knew. At home when I was a child we had a copy of  Roman Vishniac’s book of photographs of the Polish ghettos, my father resembled a figure from the ghetto. His family were orthodox Jews emigrated from Poland to England in the 1920s. On arrival they had changed their name from Zabolsky to Collins in an act of reinvention. My paternal grandfather had once owned cinemas in the North of England but by the time I was growing up all that remained of a fortune were a few old documents and redundant investments in funds like the Dresden Municipal Rehabilitation Fund. The carefully amassed money  had slowly seeped away and any fortune had turned to dust with the passage of time. My father’s illness had begun when he was a student at Cambridge, he then often couldn’t sleep for fear of death. Marriage had stabilized him for a few years but the schizophrenia took a permanent hold. He had started a magazine called Politics and Letters with Raymond Williams, the author of Culture and Society, an important book about the nature of Britain’s postwar possibilities. My early childhood contained a sense of optimism, which was to be overshadowed by illogical events and anxiety. Williams’ writing and career flourished while my father succumbed to madness.

My cardboard environments were incorporated with language that described their relationship to the human body. I printed the enormous pictures at night using long strips of photographic paper. During the many hours I looked at the negative image projected in front of me, I mentally inhabited it, creating what seemed like a darkened world in parallel to the world of illuminated spaces. Here I found a connection to surrealism and the irrational world of dreams – a world intimately related to the body. The process mirrored my everyday relationship with my father, whose logic escaped me. Eventually the work acquired its own internal logic, but it began from a point of rupture from the more conventional daily life.