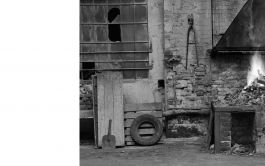 In the Course of Time, The Road to Auschwitz, 1995

In the Course of Time, 1995
Installation Chisenhale Gallery, London

In the Course of Time

In the Course of Time is a body of work that resulted from a series of journeys in Poland and Belarus carried out over two years from 1994 -1996. Both Poland and Belarus were first occupied by the Nazis and then formed part of the Soviet Union.

The resulting works are a meditation on time, identity and the effects on lives and landscape of different historical, social and political circumstances.

— This text first appeared in the catalogue accompanying Hannah Collins exhibition at the Chisenhale Gallery in 1995.

Up and around I go, faster and faster, blue, red, green, yellow flashing as I screw tight shut my eyes, opening them only to glimpse the flashing towers and grey tarmac ground below. Later on, light on my feet and giddy, I am thinner, fatter, taller, smaller in the tinny, curvy, shiny, rusty   mirrors inside.

Next I am going round and round, as if about to die, rough hard rock is driving a devilish old machine finally stopping on the raw last phrase of an American hit of a few years ago. I glimpse up at the Palace of Culture tall and stern behind before climbing into a dusty jerky ghost train ready to meet the ghouls as they leap from the walls ahead. The crazy, creaking scraping car slaps against the cardboard walls, a cranky skeleton grins from a rough wooden box, a bony maiden rattles a few glass jam jars lit by a lightbulb flickering, illuminating the narrow winding way.

Back outside, rough and raw and ready, a few young soldiers wander by trying their skills at the crooked rifles, sharing cigarettes, laughing and joking happy and at home in the age and decay.

Pale fingered plastic cloths hang heavily on six small square tables, wood upright chairs sitting hard around them. In blows blustery snow through cracks in doors and windows and the deep blue light outside fills the room. Paper streamers hang from corners curling life against the cold. Breath hangs above bread laid ready on the table and grey rising steam fills the air above the white soup cooking on the small heavy metal stove.

Off the dark brown corridor is the brown wooden bathroom. Old string hangs from a white tank, barely visible lit by a bulb hanging loosely against the dark brown stained walls. Torn newspapers are piled on the floor and flowered linoleum is creased, cracked and re-nailed. Water drips very slowly into a small basin caught below in a pale plastic bucket.

Back in the restauant the waitress with blue veined hands has left a silver space packet slowly keeling over, the top cut open and the spoon dug into the light dry white milk powder inside .

The passages are white and high: the rooms are numbered, hidden and difficult to find. Amongst the mirrors and high swirling staircases no seething passions are contained - only the cool and pale beauty of the possibility of being alone. The corridors are like a fairy tale exploring the labyrinth of the imagination with its liability to disguise evil and beauty.

Dreams and imagination are agents of faith. Signs of saving as well as signs of retreating from death.

The skies are pearl and white in the early morning light. As a white car bursts into flames at the side of th road the bright orange and purple of the flames flashes against the white of the car. Sounds of horns are hung in the morning air as traffic moves into the city along the flat sandy road. Low flying aeroplanes taking off from the nearby airport leave pink trails above. Down on the ground a pile of golden pumpkins waiting to go to market are piled up close tumbling and falling into a little stream filled with rainwater.

The sun rises and hovers over the woods. Little mice run through the undergrowth. The hushed voice of some singers floats across the air with the songs of morning birds and in the distance is the sound of passing cars.

A faint path through the vertical trees marks the hunter’s space. The hunter carrying flowers searches around the flat grey stones overcome by nature’s abandon in a mass of peaceful green. In this most absent of crowded places the visitors search their childhood experiences and their souls keep company with my end of century mind. The hunter moves through this overgrown space in the quietest of ways allowing the breeze to lift his spirit gently.

The sun beats down and the flickering heat is visible. It always seems to be noon and the buzzing of insects nearly drowns out the other sounds of humans lost in the landscape and the sea.

In the circle of the city the still air is old and lifeless where the heat gathers and seems to tremble as if listenning to the eruption of an earthquake from below. Forgotten and abandoned workshops overheat, burning away the seething furnaces they house. Back in the streets the port turns to become a market, the beach a parking lot and the crumbling walls stand still as people permanently moving home walk on.

From a nearby hill top people survey the citadel before they re-join their bus on its journey on. Standing by the water below a man told me a story in which the river has dried up in the moonlight and the people walk across.

Round staircases swirl up and up into vaulted towers and luminous liquid breath bursts from hidden attic spaces. Footsteps or white misty breaths send animals scurrying and chattering is instantly silence. Bright of day meets fear of night as snowy sheets tumble from cupboards, chests and drawers. Dust in clouds and out of cloths pour in through my mouth and down into my stomach seeming to touch my mind floating lightly above.

Outside the sun rises and hovers over the woods and a faint path through the vertical trees marks the hunters’space.

All day the travellers had been with a feeling of distance and of silence. The passers by they stopped to ask the way neither looked at them nor greeted them with smiles. They had the sensation as if in a stange country across which ran a curtain they were unable to draw back and behind which were many secrets.

As the travellers drove on they saw in the distance a castle at the entrance to a beautiful wide open valley. They arrived at the foot of a steep path upwards and leaving their car they climbed to the entrance on foot. Greeted by the guardians of the castle they were taken inside. They went through several heavy doors, each of which was unlocked and then locked behind them and they began to feel like ghosts, young amongst the older and more established spirits of the place.

After hours of trying to use a telephone only to hear a crackled faint and very distant sound they retired to their room where they lay silent in the darkness adrift and out of contact with their source. Outside through the curtainless windows they could see the ever changing skies and they could hear the wind blowing a new day down through the valley.

Nightcircles day and day chases night on a wide flat white horizon. Deep blue afternoon becomes black brown night inside long wooden sheds. Outside empties slowly of all signs of life as the last trunks cut from the forest are pulled sliding up the open white ice paths.

Frightened but sensual a big black horse snorting solid white breath stands still in a shed. Small animals chase around his heavy feet, their eyes blind in the night. Straw thrown like waves across the hard ice floor lights up as spikes of stars in the darkness. Brown hens scatter beneath heavy, hairy black feet.