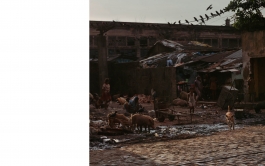 — Images made in the city of Calcutta India during 1999

On the streets of Calcutta the processes of living are inescapably apparent. Parts of personal physical experiences which in other places remain closed and private are shared, touched endured, including many parts of life which cross the boundary between physical and spiritual – for example the burning of bodies (which fascinated Allen Ginsburg in Calcutta) as well as washing, bathing, playing sleeping arguing and making love. This somehow leads to a kind of freedom in the relationships between people, in suddenly formed friendships, in quickly told histories, stories so fast and so intense that they sometimes seem never to have happened.

I was in the street of one of my pictures: a long row of three-story-high home-made wooden buildings where the trains pass overhead and there are kids everywhere.

When I take out a large format camera in Calcutta, I am immediately surrounded by people; even if I thought the street empty it becomes full, and both I and the camera are immediately immoveable. After making a choice of place and day, I lose control- I cannot see the picture through the back of the camera whilst I am making the image, creating the architectural parameters it is then necessary to rely on intuition, freed from the moment and the need to provide action because it is not within control.