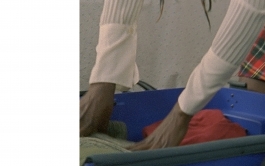 I undertook a journey to understand my own act of looking, travelling to South Africa I visited and photographed a monument built to celebrate the birthplace of Nelson Mandela in Mvezo in the Transvaal. The site itself is remote, over four hours on dirt roads cross country. Later I was taken to see the family who supported Mandela through his teenage years and photographed the hut he made his home at this time. This is now a national monument though there is little to suggest its status or to celebrate its occupant except a few random books. These four pictures are part of Parallel.

Parallel is about the movement of people in Europe and the necessary act of re-invention that this often brings about. The multi-screen installation brings together the projected experiences of immigrants as they track their new surroundings and adapt to their environments alongside others in the same situation. In the act of leaving the society from which they came the immigrants are forced to create a new way to live, often getting by and making do at the same time as driving forward in a new society. The protagonists in Parallel each embody the dual World of the immigrant as they personify custom and memory at the same time as taking on the present.

The singular viewpoint is replaced by both a multiple way of looking at similar situations and a way of passing time in different places and circumstances simultaneously. The gallery is the place of encounter for a continuous and contextualised vision of three separate lives whose meeting place on the screen is by virtue of their displacement and involves the same sense of chance that the upheaval of their lives has necessarily brought about. Each vision of this everyday is that of the protagonist in each city and gives a voice to the small and incidental acts which make up the substance of the hours, nights and days in their lives. The work is a tribute to the displaced and their contingent lifestyles and a humanisation of the everyday. Through the work I became close to people who we might brush up against in our lives without further contact as they serve us food, ask for money on the street, queue in the post office, appear as separate yet at home as they stand in the doctor’s surgery, take money from the bank teller or purchase the equipment for their homes.

The protagonists recreate their sense of place and their notion of dislocation. The camera is the witness to everyday acts such as putting on clothing, cooking, shopping. The acts of these immigrants are a celebration of the awesome scale

of adaptation that the migrant takes on as he or she absorbs and confronts a new society. The camera is the eye of the protagonist in their physical encounter with institutions such as hospitals and schools, with their places of worship in mosques and churches, in their encounters with others in their group and outside of it. Each of the protagonists brings their own vision and sense of their own place to the screen, allowing the audience to experience multiple visual encounters at the same time.

The intimacy that is present in these people’s lives is brought into a space where their aims and focus cross-fertilise with their current reality in a primarily visual dynamic. The incidental relationships that characterise these lives are the focus for the whole work as the screens work both separately and mirror one another as a whole.

Since this work was made events have overtaken Europe. The work is from a time when it was possible to record a situation without the notion of catastrophe being at the forefront of one’s thinking. It’s poetic and intimate nature is not a denial of the present reality but a confirmation of our human relationships and the possibilities they throw up.