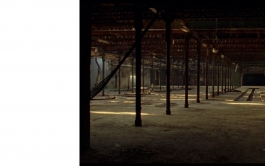 Solitude and Company was shot in Northern France in an area of abandoned factories that now houses a large Algerian community.

The film begins with found footage shot of wool production at various times over 80 years from 1880 when the factories were fully functioning, and is followed by a slowly changing 24 hour time lapse film shot in the interior of the La Tossée factory over two days and nights. Against this backdrop the residents of Roubaix relive their dreams.

The dreamers all have a connection with Algeria and their dreams often travel to places unavailable in everyday life. The dreams are released from their private night-time place whilst the abandoned and neglected factory is made visible.

A soundtrack by DJ Bouloane accompanies the film.