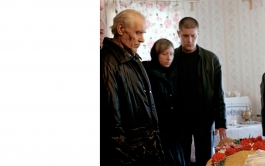 Untitled (monument in front of the Volga), 2007

Current History began with the reading of a story about revolutionary Russia written by Isaac Babel an exiled writer living in Paris, first published in 1922. The stories contained in Red Cavalry were emotional episodes describing places and people briefly and exactly in a series of very short tales.

A Current History follows a day in life of the Chiline family and other inhabitants of Beshencevo. Beshencevo, translated as the ‘mad village’, is situated on the outskirts of Nizhny Novgorod, a city in the Centre of Russia on the confluence of the Volga and Oka rivers. During the course of the film the striking difference between the ancient village and dilapidated, Post-Soviet City is explored.

The film highlights the different way in which each member of the Chiline family is adapting to life in Post-Soviet Russia. Yosha, the son, is addicted to slot machines, something which his mother Zinaida, a Roma gypsy living in the old peasant way unaware of the possibility of change, criticizes him for. His desperate young wife makes daily visits to the church to pray for a cure for her husband’s addiction. Valentine, the highly intellectual father and the one person in the village who speaks English, travels to the Volga shore to put a ribbon on the wishing tree, hoping for happiness.

The schoolmistress has been teaching at the old village school for 40 years; now there are only a handful of children left, mostly Kurdish migrants who have never seen a computer and are learning to calculate the way their parents did 30 years ago. Their educational diet contains poetry by Pushkin and the history of their Soviet village but no new information. Traditional village life is contrasted with the new industry of the huge city when Maxim, another member of the Chiline family, goes to work daily in a vodka factory. We also meet its owner, a symbol of the new Russian Capitalist. We are constantly reminded of past and future colliding.

Day and night, village and city, vodka and tea, old and new is there to help to reach an honest understanding of the pain and joy that fill the lives of the village inhabitants, whilst humour and strength help them to overcome the difficulties of the old regime and adapt to the changes and contrasts of Russian daily life.

Following the exhibition of La Mina at Rotterdam film festival Edouard Chiline son of the Chiline family, now living in Amsterdam invited me to visit his family in Russia. I returned a year later with a multinational crew to film for fourteen days in the village in the depth of Winter following a script written by myself with Edouard Chiline; with input from the family and villagers engaged to act in production. In spite of the extreme difficulty of filming in adverse circumstances which included temperatures of minus twenty I returned to London with seven hours of footage which has been edited into two versions of the film for gallery/museum exhibition and a cinema audience.