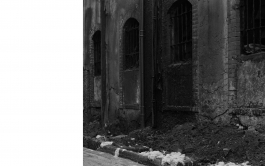 Signs of Life came about as the result of an invitation in 1992 from the British Council to make a series of works for the 3rd Istanbul Biennial. Istanbul’s position on the boundary between East and West was highlighted after 1989 when the Berlin Wall had been pulled down. The city seemed porous. An assortment of strange objects appeared on the wide streets, propped up against trees and walls, separated from their origins as if drifting, washed up following a flood. The crowds at the bus station were intense. There was evidence of massive cultural change on the streets, but it was as if a slow, languorous opera was being staged in the surrounding theatre of the city.

A tanker on the Bosporus Strait floated into view at the top of my camera frame. In a street market on the east side of the city a Soviet made lifeboat sat fully inflated on a cobbled street. An icon of St Francis was propped up against a nearby car tyre. In both images I recognised an emptiness that I had found in the cardboard in my studio. Again, these images of the actual fabric of the city allowed me to think of reproducing the surfaces at a scale that related directly to the body. Things appeared to hover around the periphery of my visual field, sometimes in one position, sometimes another. Nothing was fixed. I was witnessing so much transition and was in transit myself. Back in my studio I thought of the rolls of thin photographic paper as a skin. The analogy was limited as after the punishing process of development the printed surface of the paper reached a degree of permanence, unlike our skin, which is in a state of constant growth and decay.

Simultaneous erosion and accumulation seemed to be a defining characteristic of Istanbul in 1992. One scale was personal, intimate and human like the piles of luggage in the Kurdish bus station or the rubbish lingering on the street corners in the old districts. On another scale these transitions were global as East and West cultures touched, buildings were knocked down, repaired, adapted or proudly left standing. Crowded, juxtaposed, old and new structures seemed randomly positioned. Strange, empty spaces emerged in the vacant lots where buildings had once stood.

The layered walls of Istanbul had been peeling and crumbling for centuries. I imagined the walls as a surface on which 35mm film was projected on a continual loop. Sometimes the film ran backwards and giant discarded stones were hauled back into place where they had first been positioned only to fall again at a later time. In an area of old factories I saw the blackened walls of a tannery covered with a thick greasy layer. They looked as if they would collapse if cleaned. In the last decade these same walls have been restored. The regeneration of the city is complete and total.

Signs of Life is a marker of a period when transit and travel were different.

In less than a generation the ease of recording information has made our sense of place more superficial. The surface of the world has changed irreversibly. The force of globalisation is also one of eradication.