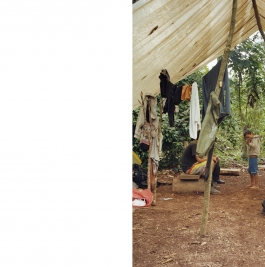 Around a third of all the world’s diverse species live in the Amazon basin. It covers more than twenty per cent of South America. I made my first trip to the area in May when much of the vast area was flooded by thousands of overflowing tributaries. The soil in the forest is rich from the endless falling leaves and rotting vegetable matter. This annual flooding dramatically erodes the earth and washes away the nutrients, leaving the roots of the trees exposed. The trees then fall. I lay awake at night listening to the distant crashes that I mistook for gunshots. The nearby sounds echoed for many miles through the immense space. The water from the forest leads to the river and then into the ocean a thousand miles away. There is no comparable flow anywhere in the world.

As I walked through the forest with Elvis, my guide from the Yacuna tribe, he made a small cut in the bark of a copal tree and lit it. A flame was fueled by the oil beneath the bark but did not burn the tree. The Yacuna's use copal flames to light their nocturnal routes. This action moved me. It was my first experience of the tribal relationship with the forest.

Intimacy with the forest also provides a practical way to treat internal and external illnesses. Richard Evans Schultes (1915–2001), a curious Harvard academic employed by the US government, spent most of the 1940s and early 1950s in the Amazon rainforest. Schultes asserted that contrary to popular conceptions, shamans were eager to share their medical secrets with outsiders. The shamanic knowledge might have been arcane but it was not secret. ‘Time is running out,’ he warned in the journal The Sciences in 1994, ‘The Indians’ botanical knowledge is disappearing even faster than the plants themselves’.

The Inga and Cofan people with whom I later travelled know thousands of plants.They use plants to help find a partner, abort a baby, treat a snake bite, bring down a fever, encourage a child to walk, treat a headache or a sharp stomach pain, toothache, rheumatism or heart problems and to create telepathic relationships with other individuals. As I walked further with them through the forest I began to appreciate the environment as a three-dimensional presence. Plants hung from the great heights of the trees. The flowers revealed their presence with fallen petals. Ferns and creepers spread along the ground or nestled in rotting fallen trunks. Tiny plants grew in the textured bark of trees, dependent on specific hosts for their survival. Many plants offer an echo of the very illness or problem that they treat – a plant used to cure snakebites looks like a snake, dark, gnarled and twisted vine is used as poison and sprouting green grass treats dandruff. The Cofans regard the forest as a mirror. Its reflections provide all they need.

It is an honour and a required procedure when staying with the Cofan tribe, to take yagé. I passed the maloka, the ceremonial house. The hardwood structure stood on thick posts. Steps led up to the two entrances. From waist height the space was open to the forest on all sides. Heavy beams supported the pitched roof. One corner was a closed area. The mysterious building suggested absence. Its function was invisible. I looked at it every day as if confronting a complete unknown.